Put on Your Wings for the Winx Club Reboot: 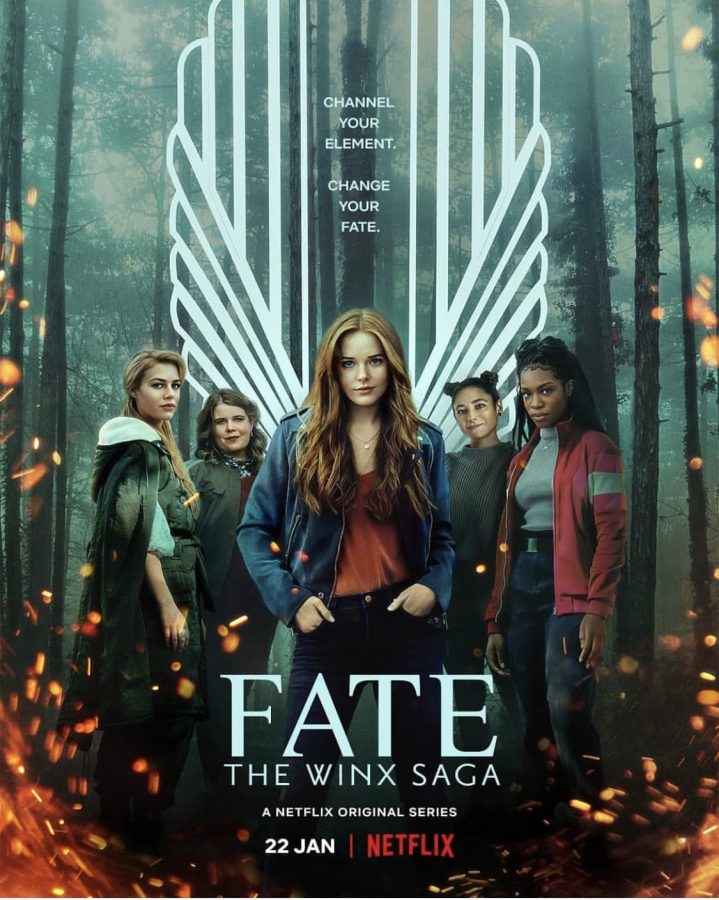 On Jan. 22, Netflix released its new 6-episode tv show, Fate: The Winx Saga. The show is based on the early-2000s cartoon, Winx Club, and attempts to bring an air of maturity to the original kids show.

While the show is a reboot, it does take some creative liberties in the show that stray from the original. In Fate the original gender based schools have been combined into one boarding school, Alfea. The specialists and fairies now share a learning place, but that is not the only change to the story.

Writers chose to omit Tecna, the fairy of technology, and the Trix, evil witches, from the cast. Instead of the Trix, the show combines all three witches (Stormy, Icy, and Darcy) into one evil character, Beatrix, who is a student at Alfea with the rest of the main characters.

While the show’s creators changed some of the show’s attributes, the creators maintained the foundation of the show: the development of Bloom and the Winx’s fairy journey.

The short tv show centers around 16 year-old Bloom as she adjusts to the sudden knowledge of her fairy history and future while she moves into the Alfea school as a first year student.

Bloom is thrust into the “Otherworld,” but with the help of her friends and roommates (Stella, Terra, Aisha, and Musa) she learns to navigate the mystical world.

Viewers follow the “Winx” as they try to navigate high school, friendships, and Bloom’s mysterious past, all while facing the threat of evil creatures called Burned Ones.

Although the show strays from the original storyline, the execution of character development and plot-sequencing is not only intricate, but easy for viewers to follow. For example, the audience watches as Bloom goes from the scared and timid girl to someone who can decimate an army of enemies.

Not only do the writers develop the main character’s plot and personality, but also the subplots of supporting roles. Through the interwoven scenes, viewers can watch the diversity of Stella’s relationship and emotions, Musa’s secret boyfriend, Terra’s battle with bullying, Aisha’s struggle with perfectionism, and many more.

Fate has so-far successfully avoided many pitfalls that teen drama shows tend to encounter. With its diverse cast and dynamic plot, there is always something for viewers to contemplate.

However, with all of its success, Fate has its issues as well. The original Winx Club was characterized by its trendy outfits and whimsical design style, however, Fate has taken a disappointingly gloomy approach to the setting and the characters’ styles. Even the specialists’ uniforms stray from the original bright blues with a dark green and black palette. The bright and colorful Alfea has been replaced with a Hogwarts wannabe, which is quite upsetting to fans of the original.

In addition to the upsetting color palette, the creators have ignored parts of the originally quite diverse cast of characters. Musa, who was originally a Chinese character based on Lucy Liu, is now played by an actress who is part Singaporean. This quite literal muddling of East Asian ethnicities only further pushes the narrative that all Asian people are the same. The erasure of Musa’s Chinese heritage is harmful not only to the show, but to viewers as well.

In addition to changing Musa’s ethnicity, the casting directors also completely ignored Flora’s (now Terra’s) ethnicity. Flora, who has been redubbed Terra in Fate, was originally created as a Latinx character based on Jennifer Lopez, but the show casted a white woman for the role. While Eliot Salt (Terra) does a superb job of portraying the character, it would have not only been more true to the show but more representative to cast a Latinx actor.

Overall, if the viewer were to completely separate Fate: The Winx Saga from their preconceived notions of Winx Club, the show is very entertaining. While Fate did disappoint die-hard fans through casting and style, the show did prove its worth through a dynamic plot.