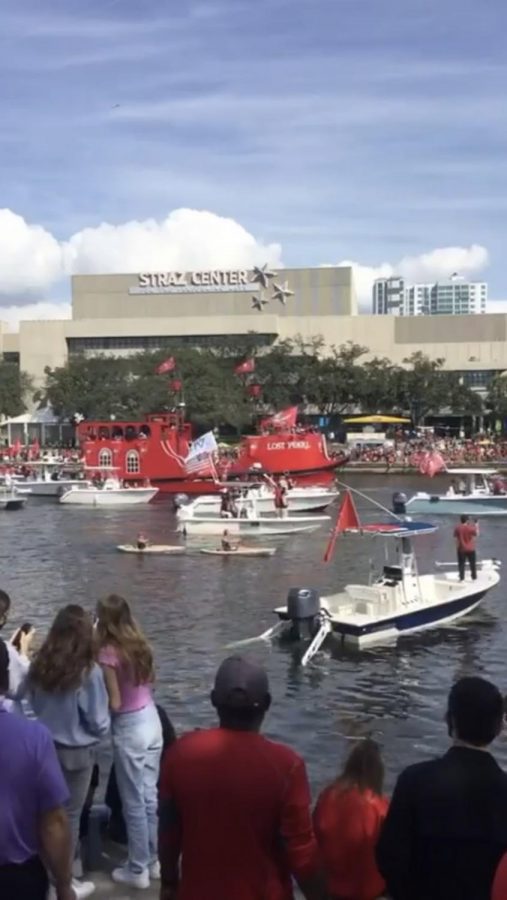 The Tampa Bay Buccaneers boat parade moved through the HIllsborough River on Feb. 10 to celebrate the Buccaneers’ first Super Bowl win since 2003, and many people lined the riverbank to get a view of the action.

When it came to the participants of the parade, onlookers were treated with a variety of celebrity appearances. The Mayor of Tampa Bay, Jane Castor, was present at many points throughout the parade, celebrating her city’s win in the Super Bowl.

It was Tom Brady, however, who was the center of the action during the parade. He was spotted cruising down the Hillsborough River in his custom made, multi-million dollar boat named “Viva a Vida.” The Buccaneers’ quarterback was quick to show off his throwing skills, by tossing the newly won Lombardi trophy to the boat behind him. This unorthodox display of skill didn’t end in tragedy however, and, like most of the balls thrown by Brady, the trophy found its mark in the safe arms of a fellow teammate, Cameron Brate.

Chris Godwin’s phone, however, was not so lucky. According to an Instagram live stream, Godwin’s phone was dropped overboard into the river by Scotty Miller.

“We were on top of the boat, on the front of the boat, and it’s a little wobbly, right? So I thought Scotty was gonna fall into the water. I brought my phone out because I was about to go live, and I feel him about to fall, so I go to stop him and his back hit the phone out of my hand and I watched it fall in,” Godwin explained in an interview with Around the NFL, linked at the bottom of the of this article.  In the end, the phone’s journey was less of an incomplete pass, and more of a fumble on Godwin’s part.

Rob Gronkowski, known by fans as a party animal, decided that he wasn’t going to let his teammates have all the fun and joined in on the action himself. He was spotted many times throughout the parade dancing with his shirt off atop a boat.

Many local businesses and groups made an appearance in the parade line. Everything from the City of Tampa’s Fire Rescue called “The Patriot”, to the Florida Aquarium’s very own boat, the “Bay Spirit” made an appearance; both covered from bow to stern in the Buccaneer’s flags. Other notable ships include the several StarShip dinner yachts that were scattered throughout the parade line, the “Lost Pearl” pirate themed tourist boat, and the many police vessels present to keep the parade moving and orderly.

Thankfully, due to the increased police presence, no major injuries of players or attendees were reported, and fans of all ages took the day to celebrate their team’s victory in the Super Bowl.