Did you Really Watch ‘Squid Game’? 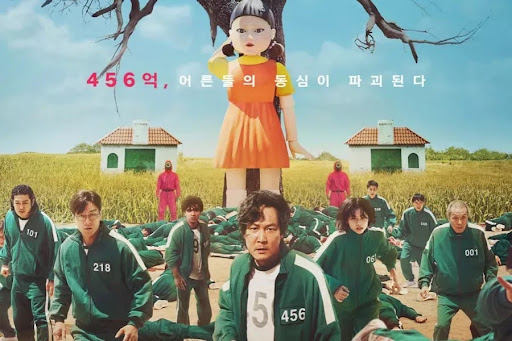 “Squid Game” has quickly become one of the most successful Netflix shows of all time. As more and more fans from around the world get immersed in the show’s plot, complex characters, and layering themes, the show gets increasingly analyzed by fans. However, with “Squid Game” being set in South Korea, cultural barriers prevent international fans from truly understanding all of the intricate underlying messages and ideas portrayed in the show.

The first cultural barrier that has been pointed out by many fans is the inaccuracy of the subtitles. As mentioned before, “Squid Game” is set in South Korea. Besides the fact that U.S. fans have to adjust to other basic differences like the currency changes (1 South Korean Won=0.00085 United States Dollar), the language barrier may take away from the full experience. As many fluent South Korean fans have explained, the dubbed version (where there is an English speaking version speaking over the original South Korean audio), as well as the English translated subtitles, are not accurate in translating what the characters are saying and don’t pick up implied meanings. For example, with the dubbed version, the English speaking voice actors fail to give the same emotion as the original actors.

Additionally, some of the implied messages from the characters fail to break through the cultural barrier because the subtitles are inaccurate. In one scene, the subtitles describe one character, Youngmi, saying “I’m not a genius, but I still got it worked out,” instead of “I am very smart, I just never got a chance to study.” Due to this wrong translation, fans who don’t speak Korean fail to understand the character referring to the wealth disparity theme. Many of the main characters were millions of dollars in debt and some of them have been poor for their whole lives. When Youngmi says this, she is referring to the fact that it is much harder for those with lower income to have higher education in order to gain wealth, rather than the English version only saying she figured it out.

As well as taking away from the original meaning, cultural barriers take away from little things the actors do to improve their performance and convey their character’s story. Throughout the show, Sae-Byeok, a North Korean defector participating in the game, tries to hide her North Korean accent. In South Korea, there is a stigma around North Korea and North Korean defectors due to the cruelty under the communist regime in North Korea. As Sae-Byeok tries to reunite her brother with her mother, who is still stuck in North Korea, with the money she tries to win in the games, she hides her accent to escape discrimination from other players. Without being Korean or knowing the difference between North and South Korean accents, you wouldn’t be able to tell these added layers to Sae-Byeok’s character. The cultural barrier reduces the understanding of complexity in the characters.

While cultural barriers can detract requisite details from the show, cultural barriers also just restrict international fans from understanding interesting facts. Specifically, the significance of the huge doll in the first episode. In the show, the first deadly game is Red Light, Green Light. In this game, the contestants are put into an arena with a giant doll. When a contestant moves when the giant doll says “red light”, the giant doll eliminates (kills) the contestant. While this scene is already eerie, the backstory of the doll makes this even scarier. In South Korean grade school, young South Koreans utilize a textbook with a boy, Cheolsoo, and a girl, Younghee. The doll in the show is modeled after Youngehee. This minor fact adds to the sinister undertones of the show as they are literally being killed by a doll from their childhood. Once again, this is something many fans wouldn’t be able to understand if they weren’t familiar with South Korean culture.

“Squid Game” has grossed almost 1 billion dollars and has become one of the most popular shows of the year. While “Squid Game” proves to be an enjoyable and valuable show to international fans all over the world, the show can prove to be an even more dimensional piece of work when South Korean culture is applied to the show. If international fans are dissatisfied with the show, which has been shown to be improbable, it’s highly encouraged that fans do a little research of their own on South Korean culture to fully experience the greatness of “Squid Game”.